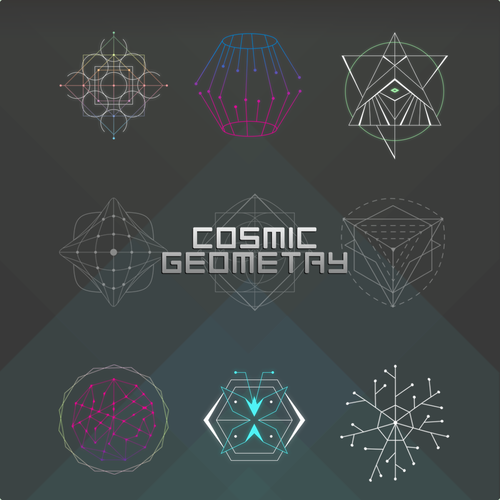 Did you know we can predict the future? It’s one of our mystical powers. For example, we knew ahead of time that you would be excited to see us announce 3 brand-new sets of effects. We’re practically psychic.
For these new effects, which we’re calling Cosmic Geometry, we’ve put ourselves in a mental space where sacred math meets mystical design. They were designed by Mehmet Reha Tugcu, an Istanbul-based self-taught designer who abandoned Economics for life as an independent creator. We stumbled on Mehmet’s work on Creative Market, where we often go to find compelling, inexpensive photos and illustrations for our projects. We saw some of the illustrations in his store and immediately thought, “Wouldn’t it be cool if we asked him to make us something for our apps?” He thought it would be cool, too. Instant synchronicity.
What to Look For
You’ll find a pack of borders called Bezel, which contains some corner-centric futuristic borders. The Wavelength overlays pack has all kinds of angular designs like chevrons and perpendicular overlapping shapes. As with all overlays, play around with the opacity and rotation controls to control the way they blend with your photos. Some work better with light images; some work better with dark images. The final pack of stickers, called Supernova, is maybe our favorite. It’s a whole set of mystical emblems that you can make as large or as little as you like to add a distinctly spiritual look to your photos. They’re quite beautiful.
As with the last set of effects we debuted in Pixlr Express, these three new set of effects are part of Pixlr Express for a limited time, but they’ll live permanently as HD packs in Pixlr Desktop for Pixlr Essentials members. If you aren’t yet an Essentials member, consider joining up. We’ll be adding more HD packs like this to the app on a regular basis.
If you try the Cosmic Geometry effects out and make something beautiful or that might just blow our minds, please share it with us. We’re scanning the Internet for creative images with the hashtag #cosmicgeometry.