Pixlr Touch Up Bumps Up to Version 1.2

Pixlr Touch Up, our works-online-and-offline photo app for Chrome just got a new touch up of its own. We just released version 1.2, which comes a few weeks after the last upgrade. If you’ve never tried it out, we encourage you to install this handy photo editor and give it a go. It’s free and works especially well if you use Google Drive to save your photos.
So, what’s new? Here’s the breakdown.
Focal blur
If you’ve used one of our other apps, Pixlr Express, you may have encountered the Focal Blur feature. It’s a great way to put a spotlight on one area of your photo and blur out the rest. It makes you look like a pro with a dSLR. You can choose between a circular focus or a linear one that rotates a full 360 degrees to draw attention to one area of an image. 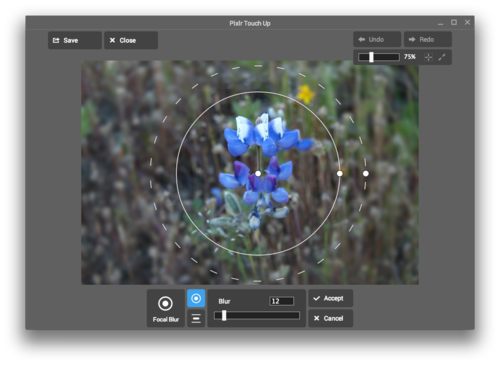 Crop proportions
One of the requests we heard from users of this app is that they wanted common cropping options. A lot of people love square photos, but some people also recommended we add other common aspect ratios like 5:4, 4:3, 3:2 and 16:9. If you regularly like to crop images using specific, common aspect ratios, you’ll be very happy to see these one-click options. 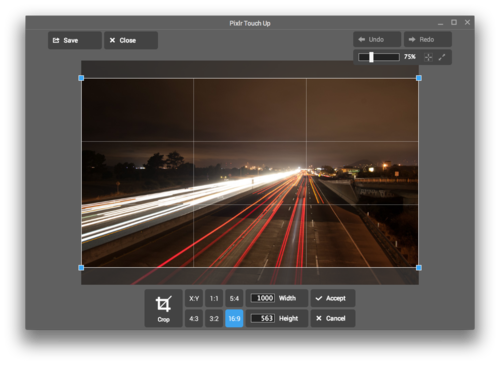 Sometimes you just want to tweak the color to bump it up or down a little. You’ve been able to adjust the Hue and Saturation controls with Touch Up in the past; now, you can tweak warmth and vibrance.
Warmth controls
The new Warmth controls let you put a color cast on your photos. A little bit goes a long way, and we encourage you to try this tool out to see how it can add some nice balance to a photo that is for whatever reason off in its color composition. Pull the slider down to make it cooler, and your lighter tones will take on an increasingly bluish tint. Drag the slider up toward the warmer end of the scale, and you’ll see results that become increasingly more yellow, orange and ultimately red. 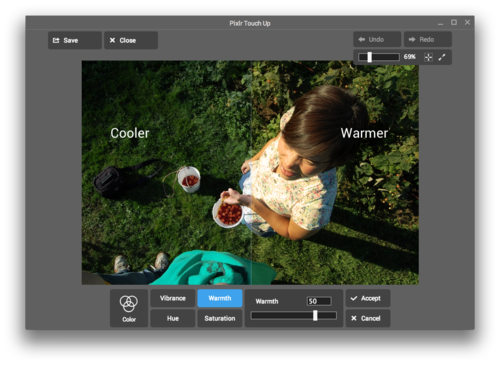 Vibrance controls
Where saturation uniformly increases the intensity of all colors — which can sometimes result in over-saturation — vibrance increases the intensity of muted colors. A great example of when you might want to use this is with a portrait. Using vibrance can prevent your skin tones from becoming over-saturated. Don’t want that skin to look orange? Use the Vibrance setting. Here’s an example of vibrance at work: 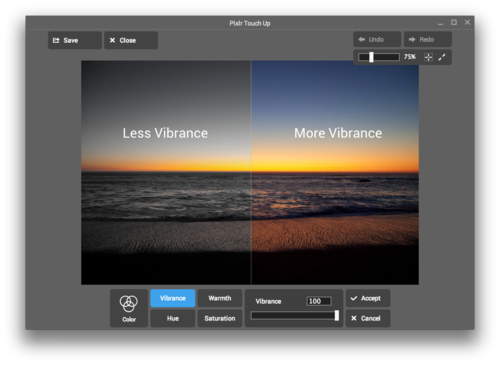 Live JPG preview
Finally, we’ve added something we think everyone who uses Touch Up will love: the ability to preview your image quality before saving. A lot of people want to keep their file sizes down, but they’re afraid to commit to a lower file size without knowing how it will turn out. This new preview lets you drag a slider to see exactly how big or small your file will be AND see exactly how that might compromise the quality of your image.

With the exception of the live JPG preview, all of these features were added in response to user feedback, so please keep it coming! Let us know in our support forum what you think of Pixlr Touch Up and what we should add next.

A Quick Guide To Selective Coloring in Pixlr Editor