Pixlr Touch Up is our new app for Chrome that works really great in conjunction with Google Drive. It’s a photo editor built on new technology that you can use directly through your browser even when you’re offline. This week, we’re celebrating its first big upgrade to version 1.1. Huzzah!
We released this new app in the Chrome App Store two months ago, and we’ve been building it up bit-by-bit to include new features. Here’s what’s new in Pixlr Touch Up. 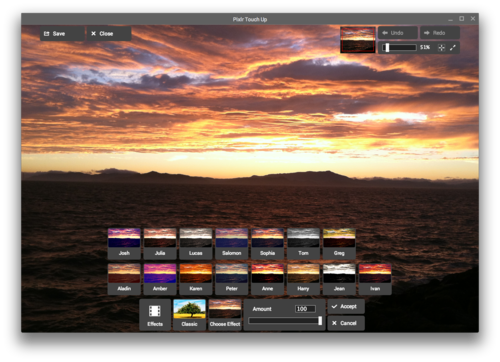 More effects
We’ve added five new effects packs. If you’ve used Pixlr Express before, you’ll probably recognize many of these. We’ve taken some of the more popular effects from Pixlr Express and added them to Touch Up. This new app doesn’t have the zillions of effects, overlays, borders, and stickers that you see in Pixlr Express, but we wanted to add some of the proven winners from our other apps to give people options. We’ll be watching closely to see how often they get used, and we’re always open to hearingwhat kind of special effects should be included in Pixlr Touch Up. 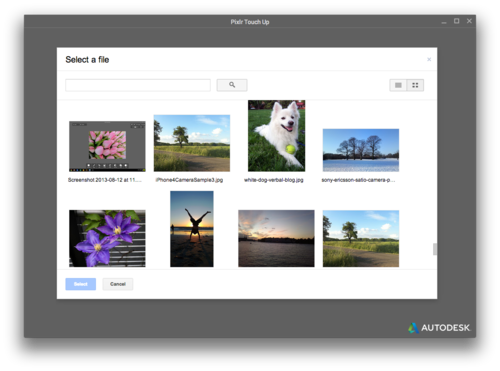 Google Drive picker
One of the absolute best pieces of feedback we got from our early adopters of this app was the request for us to include thumbnails and a search apparatus for people who are opening up files from Google Drive. People take many thousands of photos with today’s digital cameras and smartphones, and some people drop them all into Google Drive. It makes total sense to have a more refined way to dig into that large pile of photos to find the one you want. Now, you can search by filename or browse your image files a lot easier. We know this will be one of the most used features, so thank you to those of you who asked for it.
Supports higher resolution images
There is a detail about photos that is becoming more important over time: resolution. Camera and smartphone manufacturers seem to be entering a new horse race around capturing higher megapixel images, which means people are increasingly capturing photos that are — resolution-wise — massive. For that reason, we’ve increased the limits for opening high-megapixel images for people who bring a lot of pixels with their photos. For example, you can now open up a 16,000 x 11,000 pixel image with Touch Up. You may not have pixel-heavy images like this, but if you do this will make a big difference.
Supports lower resolution screens
On the other side of the resolution coin, we want Touch Up to be as useful as possible for as many people as possible. To take into account lower resolution monitors, we’ve lowered the minimum size of the editing window of Touch Up. Chances are you won’t notice this detail, but if you have a low-resolution monitor being able to resize the editing window to fit your monitor is essential.
Support for Windows 8
Pixlr Touch Up began as a Chrome App, and it still is a Chrome App, but we’ve added support for Windows 8 Chrome users. This is part of our ongoing roll-out of support for additional browsers and systems. We’re not ready to expand the app to other browsers just yet, but if you’re a Windows 8 who also loves Chrome, you can now start using Touch Up.
Beyond that, we have a few small bug fixes and improvements in this week’s release. Want to know more details about Pixlr Touch Up? Want to ask us a question, share an idea, or report a bug with this new app? We’re available on our customer support forum for feedback about Touch Up and all of our other apps.