Our next-generation photo editor Pixlr Touch Up just got a big update. In addition to adding a few popular effects from Pixlr Express, there’s a handy new addition we know people will love: fonts.
If you’ve not heard of Pixlr Touch Up or don’t know how it differs from our other apps, here’s the scoop: Pixlr Touch Up is a Chrome app that works both online and offline. It’s perfect for Chromebooks, but it’s really great for anyone who does photo editing. You can link it to Google Drive, making it super convenient for people who use Google Drive as a big photo dump. Perhaps not apparent, but quite important, is that this app is not built in Flash like some of our other apps. It’s built for the future.
So, what’s new for this update, exactly? First, we added 20 of the most popular fonts from Pixlr Express. It’s a mix of serif, non-serif, script, and whimsical fonts that will be very welcome to Chromebook users in particular since Chromebooks have limited font options to begin with. With these fonts comes the ability to choose text justification and color, as well as to control opacity. 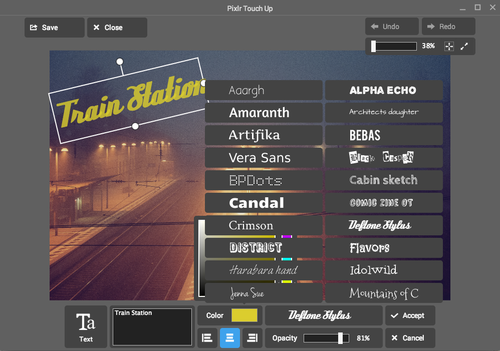 Liquify lets you realistically adjust shapes in your photos by enlarging, shrinking, or pushing the image. You might not think it, but this is one of the most used features in Pixlr Express. We added something new here, though. You can “Instant-Thin” or “Instant-Tall” an image. Perfect for making yourself look a wee bit slimmer and a little less squat. (Hey, we’re just as vain as the next guy.) 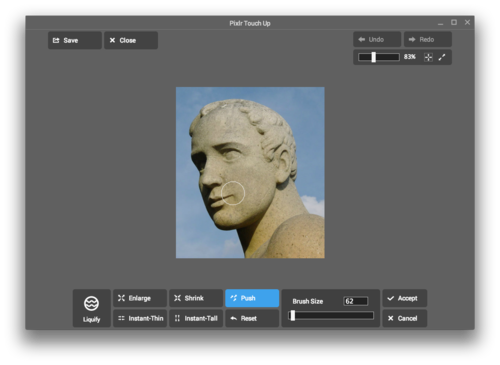 Airbrush is an essential tool for people who want to remove wrinkles and blemishes from faces. It’s handy in a lot of other ways, and you’ll see options to change the size and intensity of the brush, as well as to switch to the erase option if you need to correct some over-airbrushing.
The Smooth option applied to an entire photo will help reduce noise in an image. It’s got a  sliding scale so you can control the intensity and fine-tune your smoothing.

Win Some Nifty Prizes in the Pixlr Holiday Photo Contest